Wrap is a centre for artistic production and communication, which provides a wide range of facilities to professional artists, on a project-to-project basis. Wrap is artist-run, but none of our facilities are exclusively reserved for any particular artist. Our tools and spaces are maintained and organised by knowledgeable professionals and our prices are subsidised in order to reflect the means of most artists, and to maintain an inclusive profile.

We also initiate and curate various artistic projects that we believe benefit the artistic communities surrounding the centre.

Wrap is supported by:

2023 started with lots of artists working on exciting projects, as well as new equipment for the AV Lab, and new Audioglimt concerts!

Visual artist, Kiyoshi Yamamoto, has been working on new projects in our paint workshop, Musician/composer.

History Disposal Unit worked on new developments to Speaker Park in the Big Project Room, including a new composition that is under commission from Leo Preston and Owen Weaver.

The Panoptikon production has been using the workshop suite (wood and metalwork, electronics and paint workshops) as well as Wrap’s Big Project Room, and Studio A (AV Lab) in order to have the whole international production team working together under the same roof.

Panoptikon can be seen in Bergen at Cornerteateret from the 10th to the 12th of february.

Check out and subscribe to our Youtube channel where you can find Audioglimt documentation, and interviews such as the recent one with Åtsel Film. 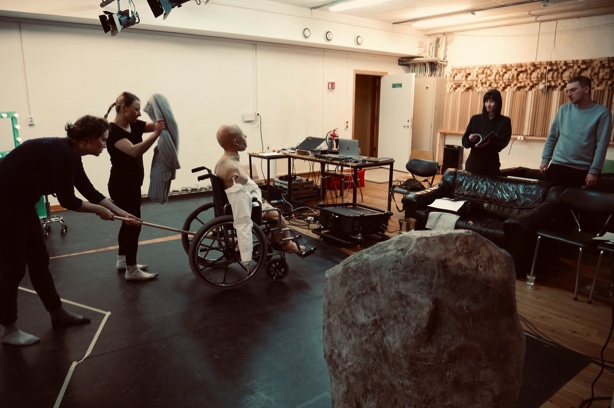