Omar E. Johnsen and Craig T. Wells bonded over their shared enthusiasm for analog modular synthesis and an active involvement in Bergen’s experimental electronic music scene over several years. In spite of very different backgrounds, they have many shared interests such as sound design, improvisation and hardware music instruments.

For Audioglimt they will explore the relationship between electronic/synthetic and manipulated sounds, set to the spectacular nature cinematography of Microcosmos (1996, Nuridsany and Pérennou).

Craig has collected a library of field recordings from the Limpopo River near Botswana, which will be manipulated and enmeshed with synthesised sounds to create a dense swathing tapestry of acoustic and electronic motifs that counterpoint and interact with the film, questioning as much as reinforcing it’s original narrative.

Microcosmos took 15 years to research, 2 years of equipment design and 3 years of shooting. The only spoken word is poetic narration at the beginning and end of the film.

The concert will be live streamed for those who prefer to stay home. Follow the event on Facebook to be informed about the stream.

The bar is open before and after the concert, but there will be no home made food due to health precautions!

Due to limited space, you can reserve a seat by mailing us (first come first served).

is a musician who has put the electric guitar to the side in order to explore new territories within music and sound, now first and foremost with the modular synthesizer, lately more frequently collaborating with visual artists and other creative people.

He is to some known as a member of the indie electronic band named Casiokids flipping between different instruments, but has the last few years changed focus to modular synthesis, improvised music and sound installations. Following this pathway he has recently started performing with a box fresh solo project exploring his roots with a name that somehow reveals his ancestry - Neo Borneo.

is a philosopher and  improviser based in Bergen who is a member of the Norwegian Artistic Research team. He works with multi channel composition, synthesis and improvisation that teeters at the fringes of the idiomatic. His interests reside in field recording, noise and beat science beyond the dance-floor with particular emphasis placed on real time improvisation using primarily a hardware ecology. He has released albums under various monikors such as Klunks, Refrains, Medikal and currently uses the pseudonym Vonrik Haug where he explores sound diffusion and elevation and azimuth as compositional syntax. 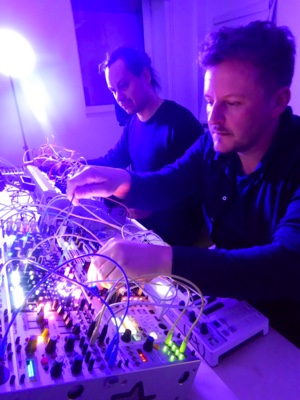